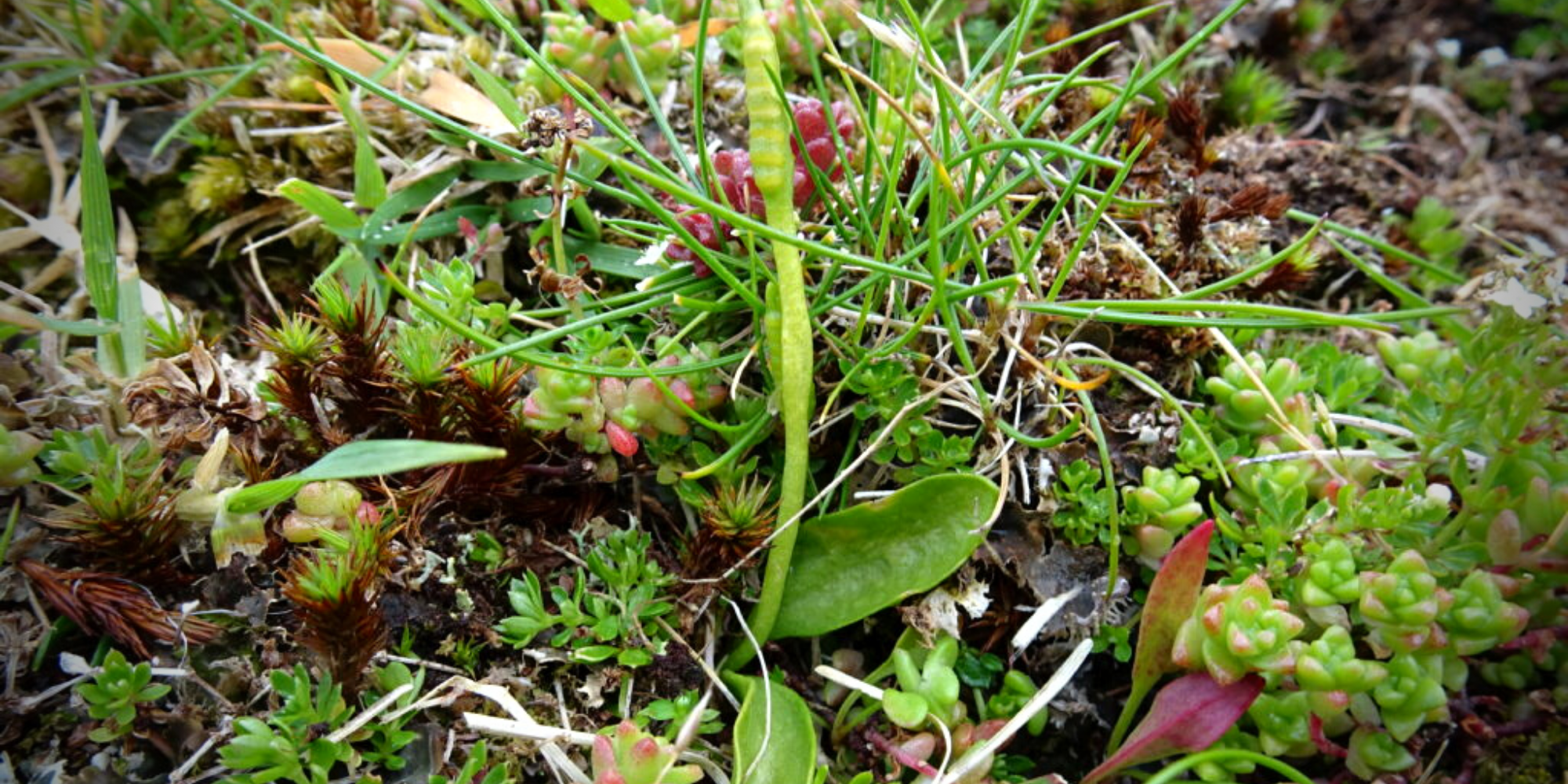 Small adder's-tongue fern: A small plant with a big genome

The small adder’s-tongue fern has a single leaf not much bigger than your little fingernail. Apart from this easily overlooked leaf, the only other visible part of the plant is a slender fertile frond a few centimetres tall that produces spores and gives the plant its name.

Adding to the challenge of finding this plant is the fact that it dies back to an underground storage organ from July until the following spring. Given all of this, it is not entirely surprising to learn that this species is a relatively recent discovery on the Isle of Raasay and probably still goes unnoticed in some places on the island and on nearby Skye.

This nationally scarce plant has a liking for coastal grasslands composed of short turf in relatively remote parts of the west of Britain, particularly the islands of Scotland’s west coast, including the Outer Hebrides, Orkney and Shetland.

The Darwin Tree of Life project is in the process of sampling 2,000 British native species to generate complete genomes for each. This is a prelude to our overall aim to sequence the genomes of the 70,000 species estimated to occur in Britain and Ireland. The current list of plants to be sampled has been carefully constructed to include examples of all the major groups of plants, known as families.

The small adder’s-tongue fern (Ophioglossum azoricum) has a slightly larger and more widely distributed relative called the common adder’s-tongue fern (O. vulgatum). This second species was chosen to represent this family of ferns on the list of 2,000 and has already been sampled from Holyrood Park in Edinburgh, where a large population is found in the area called Hunter’s Bog. When the opportunity arose for the Royal Botanic Garden Edinburgh to sample the rarer species as well, it was not to be missed.

In 1996 Stephen Bungard was with his son visiting a tidal island called Eilean Tigh off the north coast of the Isle of Raasay. His son spotted an unfamiliar small plant and showed it to Stephen. This turned out to be the first record of small adder’s-tongue fern from Raasay. Since then, Stephen has found the species at several sites on Raasay and Skye and has made progress with understanding the different habitat preferences of the common and the small adder’s-tongue ferns, both of which occur on the islands.

As part of the public engagement activity associated with the Darwin Tree of Life, the Botanics is working with the Skye Botany Group to encourage people to report sightings of adder’s-tongue ferns and another potentially overlooked fern hybrid called Manton’s polypody (Polypodium x mantoniae). Using Stephen’s local knowledge, we were able to organise a field trip to sample the small adder’s-tongue fern for genome sequencing.

On 3 July 2022, a trip to sample the small adder’s-tongue fern was successfully completed with the Skye Botany Group. This was conducted with the landowner’s permission and involved freezing tissue samples in the field with a portable flask of liquid nitrogen to ensure DNA of the highest quality, in terms of sequence length, is preserved.

In addition to recording details of the location and habitat, there were extra samples taken for genome sizing, DNA barcoding and a single complete plant was dug up and pressed as a voucher specimen. Where possible samples were taken as single leaves from plants with two leaves to minimise the impact. The single voucher specimen was the only loss to the population of around 1,000 plants, which it is worth saying appears to be stable. Having a physical specimen to act as evidence is vital to back up the genetic data that will be derived from the other samples.

The voucher specimen will be preserved in perpetuity as a pressed specimen in the Garden’s herbarium collection of around 3 million specimens that is a critical resource for botanical research.

Species in the genus Ophioglossum, which translates as ‘snake-tongue’, are renowned for having extremely large genomes – the complete set of genetic instructions present in an organism’s cells – divided across many chromosomes. The human genome is divided across 46 chromosomes that form 23 pairs. In the case of the small adder’s-tongue fern there are around 480 chromosomes and some other species of adder’s-tongue ferns have been found to have up to 720 chromosomes.

The sheer size of the genome is going to make generating the first complete genome sequence for the small adder’s-tongue fern especially challenging. Generally, the Darwin Tree of Life sequencing team at the Wellcome Sanger Institute in Cambridgeshire have been finding that plants are more difficult to sequence than animals. Unwanted chemical compounds often get extracted from plant tissues alongside the DNA and these compounds can interfere with DNA sequencing.

A poignant moment of the trip was seeing the abandoned village near Manish More, visible as a series of stone walls in a wooded gulley leading down to a small beach. The village site acts as reminder that a community once made a living from the land and the sea here and that Raasay was more widely populated before the period known as the Highland Clearances in the 18th and 19th centuries. Seeing the area as it is today, it is hard to imagine that people raised livestock and grew crops in this rugged landscape and managed to eke out an existence. The sunshine as we viewed the ruined houses gave a false impression of an idyllic rural life.