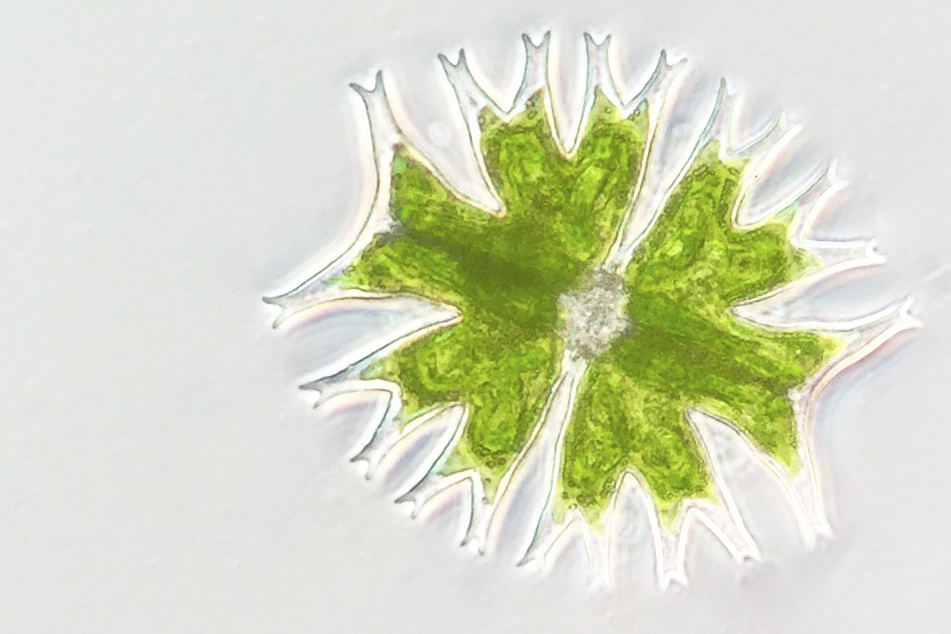 The Weird and Wonderful World of Protists

Sally Warring’s first few months at Earlham Institute have been a little out of the ordinary – especially after arriving in the UK from New York in the midst of an accelerating global pandemic. But for someone who studies an unusual group of organisms called protists, extraordinary is the norm.

As a postdoc in the Neil Hall Group, Warring will be working on the Darwin Tree of Life project to sequence the DNA of every eukaryotic species in the British Isles. Had coronavirus not intervened, Warring would have spent the summer months traversing the country in search of novel protists – the mostly single-celled, mostly microscopic, always fascinatingly diverse creatures that science, so far, has paid scant attention to in comparison to plants and animals.

“Protists are awesome,” Warring enthuses while bubbling up a broth of nutritious wheat bran – the preferred diet of some ciliates she is culturing for an experiment. “They make up the vast majority of eukaryotic diversity, yet we have relatively few described species and even fewer genomes available.”

Indeed, from the little that is already known about them, it’s clear that protists are unfairly grouped together under one title, when really they comprise vast, interlinked branches of the tree of life that dwarf the small twigs of plants, animals and fungi.

“Protists do so many different things,” explains Warring. “Some of them have really complex behaviours. They hunt, they mate, they build structures, they can live in complex communities and colonies. They provide lots in every ecosystem. They’re major primary producers, they’re degraders. Some of them are symbionts in many different ways.

“And there are millions of [species of] them – a small cup of sea water would have many and most would be undescribed. We also don’t know many of them very well. They probably do weird and wonderful things – odd ways of arranging their genomes, or doing just about anything. There’s so much diversity, we don’t know much about that diversity, and it’s all related, really, to our understanding of the evolution of life.”

For the love of protists

Warring discovered her passion for protists at University, where she was able to use a microscope to first delve into what makes ponds murky and seas bloom. She has continued that passion through building a career working on them, from parasites to free living creatures, as well as photographing and filming obscure microbes to help bring the world of protists to a wide audience through her website and a hugely popular instagram channel (Pondlife_Pondlife), which has almost 50 thousand followers.

“It was something I started during my PhD, after a conversation with my husband. I was telling him about protists and he was saying that it might be something that would be cool on TV. I thought, why am I not doing something about it?

“I had a fair bit of experience with microscopes for research purposes, but imaging for a general audience is different. You want to prioritise different things. So I took my iPhone, which I learned very quickly could quite easily be attached to a microscope, and it’s a really easy way to generate photography. I know scientists now who use their iPhones to generate their research images. It’s a good, affordable way to do it.

“I started posting them to instagram and it went from there.”

This engagement online has led to some really exciting public engagement projects, including some online education, and a collaboration with the American Museum of Natural History. Together with the museum, Warring made a series of short films called “Pondlife”, a “safari to explore the microbial wildernesses all around us”, which you can see on YouTube.

This article was originally posted on the Earlham Institute website on August 23rd 2020 and is reposted here with the generous permission of Sally Warring and Peter Bickerton.

Pond Scum Under the Microscope

For Warring, this sort of public engagement with science is really important.

“This is most of life’s diversity which people never see. There’s so much natural history content on TV, which is fantastic, but it’s exclusively about animals and sometimes plants. But I think that it’s important, when understanding evolution and our place in the ecosystem – to understand biology – it’s useful to have an understanding of cells, in particular, and also microorganisms. They are the foundations of all of our food chains, of biotic cycles, and also our own evolution. So, I think it’s a good thing to have people more aware of microorganisms. And also they’re really cool.

“It’s also pretty hard to engage with scientific content. You can only really read a scientific paper if you’ve got a PhD. There are lots of good things going on around that, but it’s a problem. The only people who can engage with research are other researchers.”

As part of EI’s contribution to the groundbreaking Darwin Tree of Life Project, Warring is working to establish a new way of sorting and documenting protists from environmental samples. This work is only possible due to EI’s unique and cutting edge pipeline for the analysis of single cells, which Warring is adapting to the study of protists.

“What I’m doing now is culturing protists to use Hi-C [a chromosome capturing mechanism], which looks at the proximity of DNA sequences to each other to get a better idea about the structure of genomic sequences. We’re trying to establish this in our single cell pipeline, possibly from metagenomic samples, to get better single cell genomes.

“What you get from that is hopefully a more accurate picture of the genome. You get information about where the genes are in relation to each other, but also about telomeres and centromeres – which is all really important information about genome structure. This is especially true for microorganisms when we don’t know much about species boundaries, for example. Having knowledge about gene synteny or genomic structure can be potentially really useful for determining whether two single cells are the same species or not.”

“Hi-C relies on looking at DNA proximity on chromosomes. But then you have these organisms called ciliates which have two nuclei. One of them is somewhat normal and then the other is just a bunch of short fragments of DNA – many of them, with genes on them – so I don’t know how Hi-C will behave under those conditions. And there’s a lot of ciliates.”

When it comes to discovering novelties about the biology of life on Earth, Warring says that it’s among protists that we’re likely to find many of the breakthroughs in our understanding.

“I think there’ll be different ways of doing things that we’ve only really studied in model organisms. Much of our knowledge on how genomes work comes from yeast, but protists have lots of different ways of doing things – and through them we can explore just how diverse biology can be. We have these dogmas and axioms of biology that might not be as common as we think. Then there’s evolution – protists are most similar to the organisms from which we evolved – and we still have lots of missing links we don’t understand in that process.”

Despite their vibrant diversity, studying the extraordinary world of protists could teach us more about our relatedness to other organisms.

“We’re just scratching the surface of what we know – I can’t even imagine what sort of things we’re going to come across.”