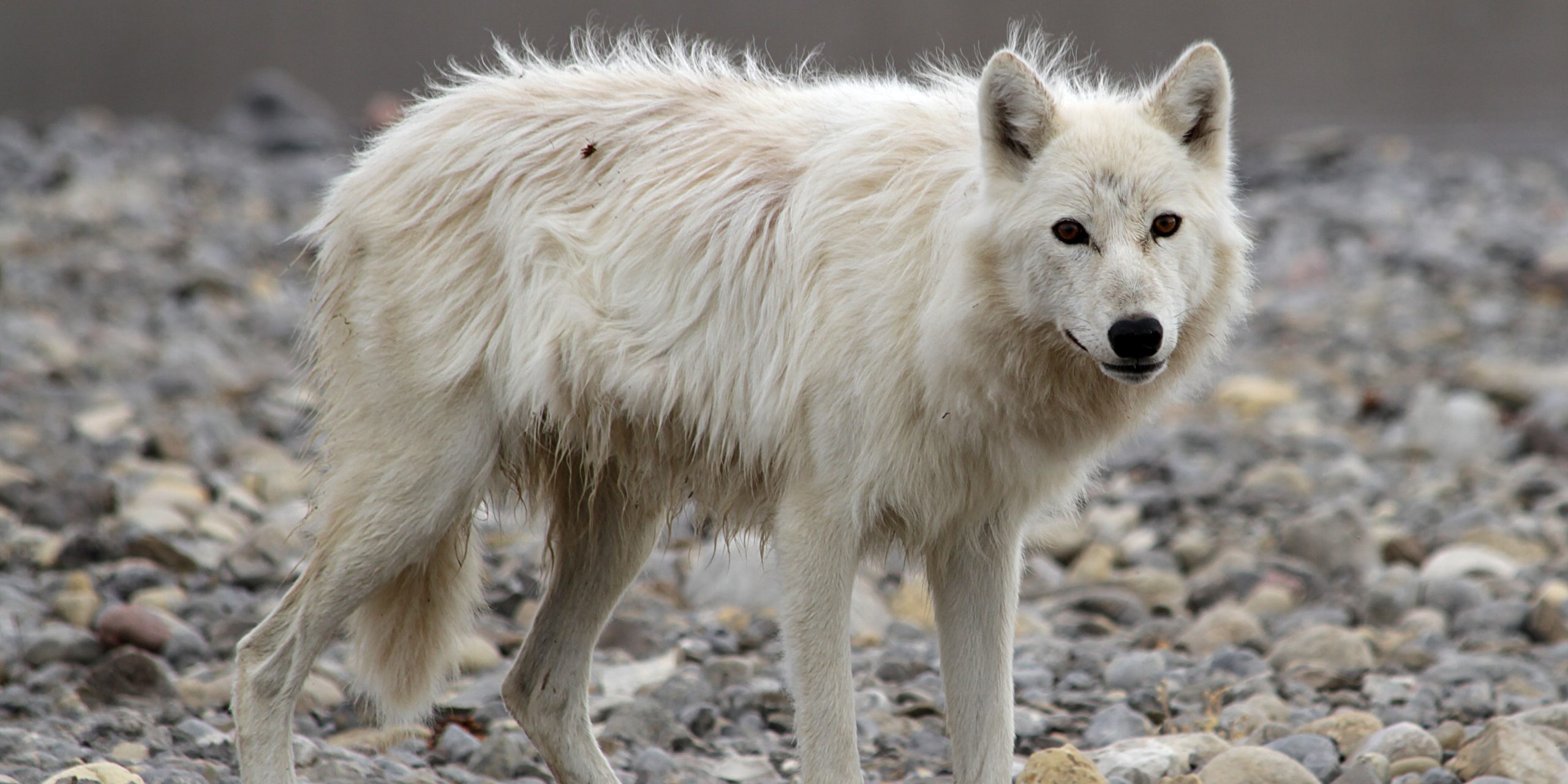 The Darwin Tree of Life project has recently sequenced and published the full genome of a grey wolf, specifically a member of the subspecies found in Greenland – Canis lupus orion. This will now be the highest quality wolf genome available to researchers worldwide.

But why is DToL sequencing this animal at all? Why create extra work for ourselves when we have around 70,000 species to sequence that actually live in Britain and Ireland?

Wolves may no longer run wild in these isles, but their eradication has left a wolf-shaped hole in our ecosystem. Britain’s last indigenous grey wolf probably died around 300 years ago – the actual date is obscured by local legend and uncertain sightings. But three centuries is a blip in evolutionary history: everything else that lives here evolved in the presence of wolves.

What’s more, many people believe that reintroducing these apex predators is one way to restore the denuded habitats in areas such as the Highlands of Scotland. Put simply, Canis lupus is an integral part of these islands’ natural history, and potentially its future too.

Why wolves? How reintroductions can transform ecosystems

Perhaps the most famous example of a biodiversity boost from reintroducing wolves is at Yellowstone National Park, in the northwestern United States. The grey wolf was reintroduced here in 1995, having been hunted to local extinction in the 1930s. The result was a phenomenon biologists call a trophic cascade: ripples of change through all levels of the ecosystem.

Wolves put much-needed predatory pressure on local elk, which had been intensely grazing vegetation such as willow. Rather than being able to destroy whole plants at their leisure, the threat of wolves changed elk behaviour, keeping them wary and on the move.

After decades of destruction, the trees had an opportunity to grow back, providing more food for birds, bison and moose. Beavers in particular benefited from the thriving willow, and their return reshaped rivers creating better conditions for fish. Even the elk benefited, their herds becoming more robust as the wolves weeded out old and sick individuals.

The complex changes at Yellowstone will take decades of study to fully understand, but there’s no reason to think a similar situation would not play out in the Scottish Highlands. Here, the red deer population plays a similar role to elk in Yellowstone. Their intensive grazing prevents anything above the size of a shrub from growing.

There is a potential economic benefit to local landowners too. The UK government sets targets for deer numbers, and estates have to manage this with expensive culling. Wolves might do the work for free. And that’s before factoring in potential ecotourism revenues from “wolf tours”.

Genomics helps to select individuals most genetically similar for reintroduction. This is important because, over generations, populations pick up mutations that help them thrive in their local environment. By sequencing the genomes of various populations, scientists can work out which living animals share these genetic advantages with the population that was lost. The theory is that these will be best suited for reintroduction.

Here, however, Canis lupus can be a bit tricky. Wolves are very mobile animals, with packs ranging over huge distances. As a result, lots of different wolf populations will have bred throughout the centuries. Compared to other species, the genetic distinctiveness of wolves in different places – known as their phylogeography – is not very strong.

But we don’t know if this holds true for British wolves, because we don’t yet have DNA data from British specimens. Perhaps they were very similar to Eurasian wolves (Canis lupus lupus). Or perhaps living on an archipelago, cut off from the mainland for over 8,000 years, made them genetically distinct. This is what happened to wolves in Japan, a similarly sized archipelago at the other end of Eurasia cut off around the same time.

Research on long-dead wolf specimens is ongoing, and this is an exciting question that genomics may soon answer. Of course, finding out that British wolves were a separate lineage would be a bittersweet discovery: confirmation that humans once again wiped out something special.

The likelihood of British wolves being genetically close to the Greenland wolf DToL has sequenced is slim. This is a North American population, and a distinct one at that. Nevertheless, it will be an important reference genome which can be used to compare the genetic diversity within Canis lupus as a whole.

Genomic questions aside, the big obstacle to wolf reintroduction remains human attitudes. We have been socially programmed over generations to fear this predator perhaps above all else: from Bible passages and folk fables to werewolf legends and modern media. And while much of this is overblown, it is true that when Canis lupus and Homo sapiens meet there is often fatal conflict – usually with the wolf on the losing side.

The Greenland wolf specimen DToL has sequenced is a reminder of this. The wolf had little fear of humans, persistently entering the Greenlandic village of Siorapaluk, and could not be chased away. It was decided the wolf needed to be killed to protect the villagers and their dogs, and it was put down by the municipal bailiff on January 13, 2016.

The reappearance of wolves in other countries has triggered tension with vested interests such as farmers and hunters. Wolves recolonised Denmark at the start of the last decade, their immigration from Germany and Poland hailed as a success. In 2018, one of the first wolves born in the country for 200 years was shot dead from a parked car, the incident caught on video. The same hostile interest groups, tensions and controversies exist in the UK too – and here, wolves are not going to simply wander across the border.

So it seems unlikely wolves will be reintroduced any time soon. But other top predators might be. A leading candidate is the Eurasian lynx (Lynx lynx), which poses minimal threat to humans. For lynx, genomics is already providing a useful tool for reintroductions across Europe. And genomics are also being used to help bring back other species to Britain: for example, scientists have used genomic studies to inform reintroductions of Eurasian beavers (Castor fiber).

While the future of the wolf in Britain and Ireland remains uncertain, an increasingly close connection between reintroductions and genomics seems guaranteed.

With thanks to Dr. Ross Barnett, who talked to Darwin Tree of Life for this article. Ross is a palaeontologist with a PhD in Zoology from the University of Oxford and author of The Missing Lynx: The Past and Future of Britain’s Lost Mammals (Bloomsbury Wildlife, 2019).

The main image is by Love Dalén, Professor in Evolutionary Genetics at the Centre for Palaeogenetics in Stockholm, and was taken in northern Greenland in 2019 during a an expedition funded be the Swedish Polar Research Secretariat. Professor Dalén is one of the authors on our Genome Note for the Greenland wolf.