There are around 3,000 vascular plant species in Britain and Ireland. Of this group – which includes all flowering plants, conifers and ferns – 1,500 or so live in the county of Cornwall. And about half of those live on Britain’s most southerly peninsula – The Lizard.

This means a quarter of our vascular plants live in an area of roughly 23 square kilometres (14 square miles). What’s more, thanks to The Lizard’s warm coastal climate, many of these plants are rarely found elsewhere in Britain. This was an irresistible draw for a team of Darwin Tree of Life botanists led by Ilia Leitch from the Royal Botanic Gardens, Kew. 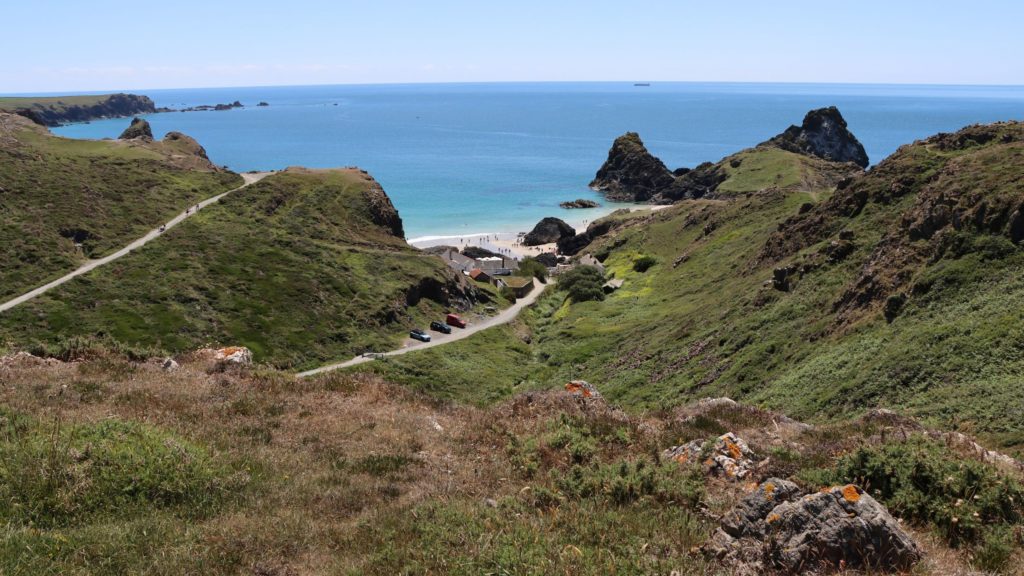 This collecting trip was special for another reason too. As part of our goal to bring the science of biodiversity genomics to the public, the Kew team would not be collecting alone. Over two days, our scientists were joined by knowledgeable local botanists from the Botanical Group Cornwall and other local wild flower groups.

Each member would get a chance to learn about how we collect samples for the project, and to collect a species themselves. After the species has its genome sequenced and assembled by our lab teams, the collectors’ names will appear as authors on the Genome Notes – short scientific publications outlining how we did it.

At the same time, our scientists benefited from some phenomenally detailed knowledge of The Lizard’s fantastic flora. Leading the group of botanists were Ian Bennallick and Colin French, Cornwall’s county recorders for the Botanical Society of Britain and Ireland (BSBI). Ian is also co-ordinator of the Botanical Cornwall Group.

Ian has led ecological tours across Europe and the Middle East, and his energetic enthusiasm to reach the next rare plant is infectious. The depth of Colin’s knowledge of Cornish plantlife is profound. Between 2007 and 2020 he surveyed each of the 3,944 square kilometres of Cornwall – in all four seasons – to produce the definitive guide to the county’s flora.

The collecting trip started at 10am from the cliffs overlooking Kynance Cove. This popular tourist beach on the western coast of The Lizard is ringed by elaborate rock formations, beyond which lie the heaths and boggy wetlands that support the peninsula’s specialised plant life. The sun beat down on the calm azure sea – but with much plant collecting to be done, there was no time for a dip.

The group had barely made it into the overflow car park before someone spotted a patch of Greek sea-spurrey (Spergularia bocconei).

This specimen was admittedly not much to look at, especially since its delicate pinky-white flowers were almost totally absent. But the tangle of small green leaves provided the perfect opportunity to demonstrate Kew’s four-step collecting method.

How we collect plants for Darwin Tree of Life

Full genome sequencing. These samples get sent to the Wellcome Sanger Institute. They need to be fresh, healthy material which is put in barcoded tubes and frozen very rapidly on dry ice. This ensures the DNA is preserved, giving us the best chance of producing the platinum-grade chromosomal-level genome assemblies at the heart of the Darwin Tree of Life project.

Genome size estimate. Having an idea of genome size lets us know how long sequencing might take, how much data we need, and how much it will cost. For this, we collect a fresh leaf in a plastic bag to keep it moist. This process is conducted by Sahr Mian, one of the Kew team who visited The Lizard.

Learn more about the diversity of plant genome sizes in this DToL article.

DNA barcoding. Sequencing this small, unique string of genetic code helps us check the sample collected is indeed the species we think it is. The sample is packed in a bag with silica gel and sent to the Royal Botanic Garden, Edinburgh, where all plant DNA barcoding happens for Darwin Tree of Life.

Herbarium voucher. This is our permanent record of the plant material. If anybody is in any doubt, and wants to come back and look at it later, we have a pressed plant of the species that we have collected. We make two of these, one which goes to the Kew herbarium and one to the herbarium in the Royal Botanic Garden, Edinburgh. Expert botanist Maarten Christenhusz took charge of the voucher pressing on The Lizard.

With one species collected, a local collector on the books, and the overflow car park rapidly filling up, Ian guided the group towards some even rarer plants he knew to be in the area. But barely 20 metres down the trail, the Darwin Tree of Life team were distracted by the beautiful Dropwort (Filipendula vulgaris) rising out of a nearby hedgerow. It was no surprise to see this plant on The Lizard, since it likes to grow over serpentine – the rock from which much of the peninsula is formed.

Stopping off to sample a prostrate broom (Cytisus scoparius subsp. maritimus) jutting horizontally from a rocky outcrop, the group eventually reached a patch of heathland. Here they found an abundance of Cornish Heath (Erica vagans), the county flower of Cornwall. Some may have been disappointed not to see its clusters of tiny pink flowers in bloom. However, for the project’s purposes, our scientists target leaf material rather than flowers. 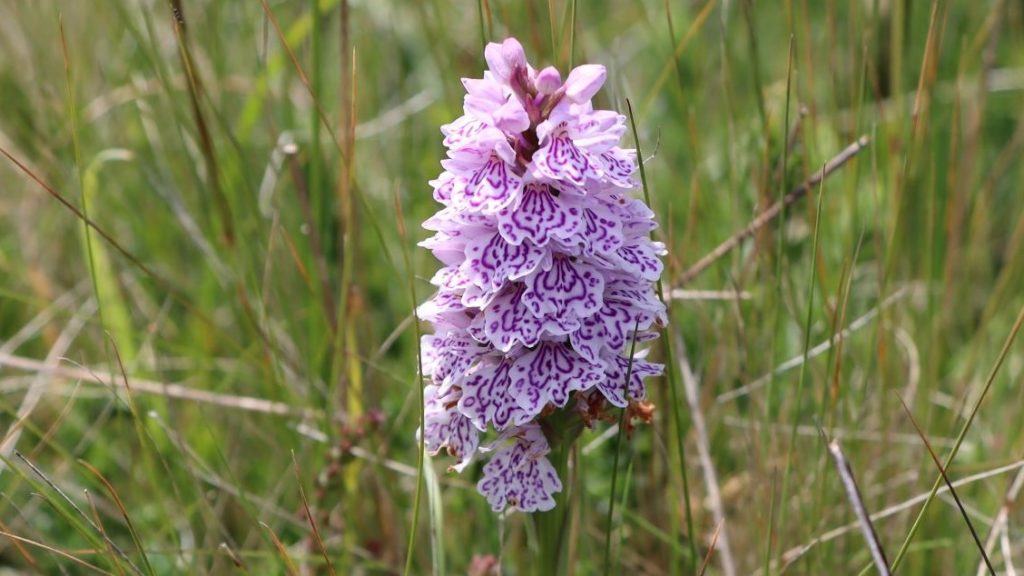 Also on the heath was the group’s first species of Genista, Petty Whin (Genista anglica). Three species of these spiny shrubs with striking yellow flowers featured on our scientists’ Lizard collection list. All three would be collected in the course of the day.

Next, the group strolled downhill to some boggy fenland. Here the eagle-eyed Ian spotted a small patch of butterwort (Pinguicula lusitanica) hidden under a clump of grass. This plant is insectivorous, trapping unfortunate arthropods with its sticky leaves. 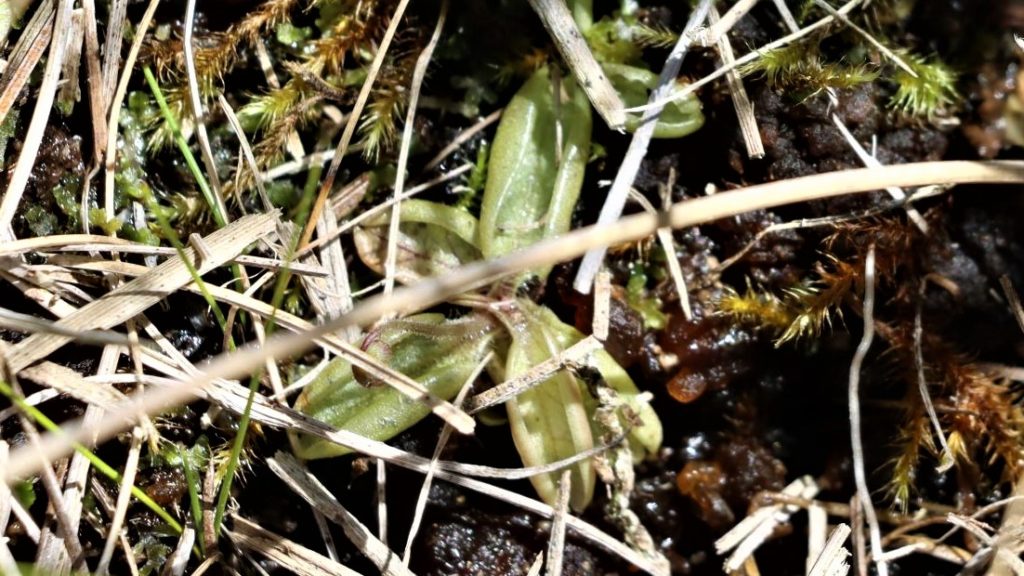 The team left the diminutive butterwort be, however, instead opting to collect an impressive saw-sedge (Cladium mariscus), so called for the serrated edge to its long leaves. This one was a particular challenge to press for the herbarium. 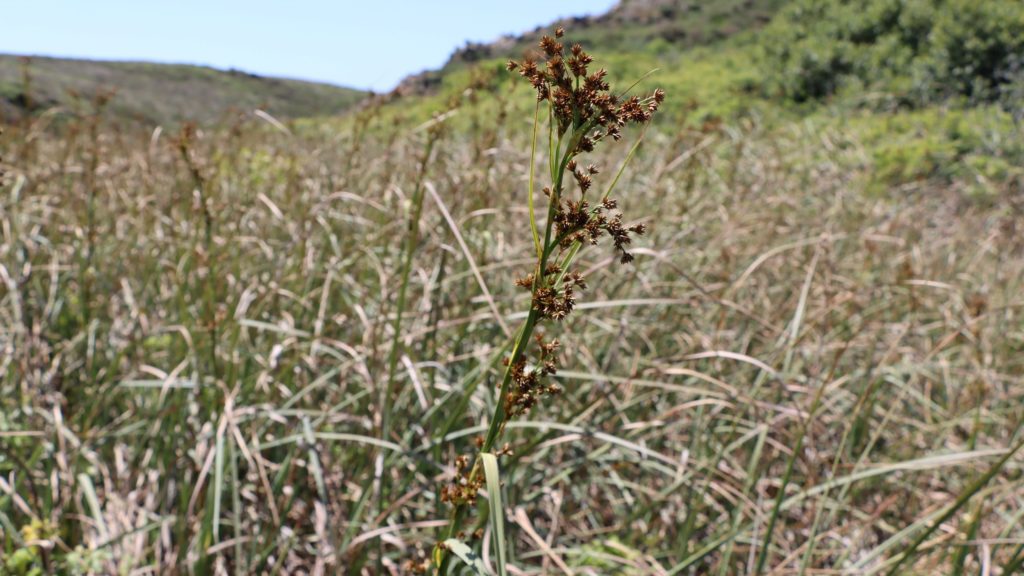 After lunch overlooking the unexpectedly turquoise sea, the team continued their collecting along the cliffs. A second Genista, Cliff Dyer’s Greenweed (Genista tinctoria subsp. littoralis) was spotted growing in great yellow clumps. Its relative, Hairy Greenweed (Genista pilosa), was also nearby but not in bloom, and the team required Ian and Colin’s expert knowledge to spot it. 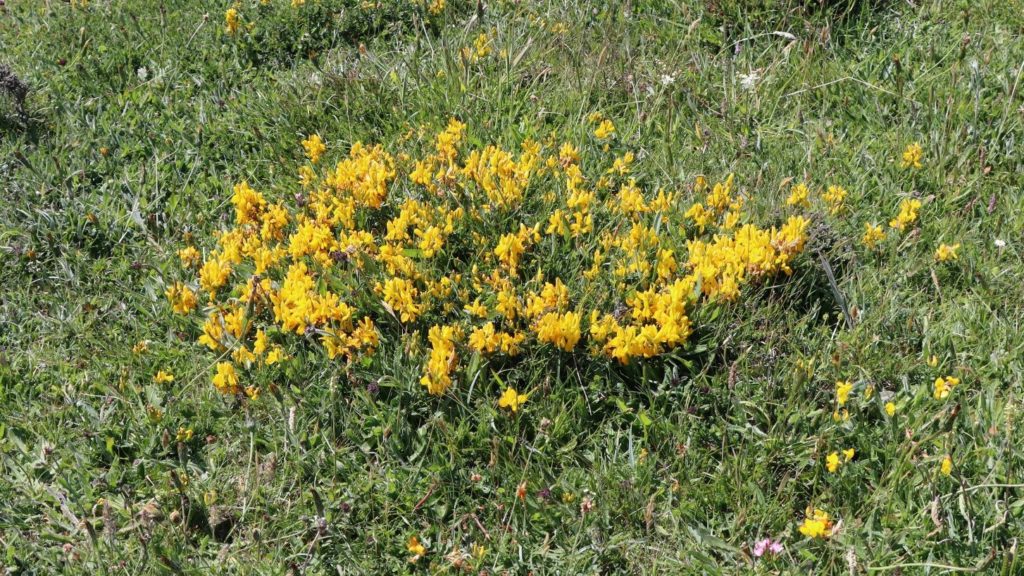 Another exciting sight was a cluster of Thyme Broomrape (Orobanche alba). Although not among the most attractive plants on The Lizard, broomrape is interesting for its parasitism and its reliance on host plants for nutrients. 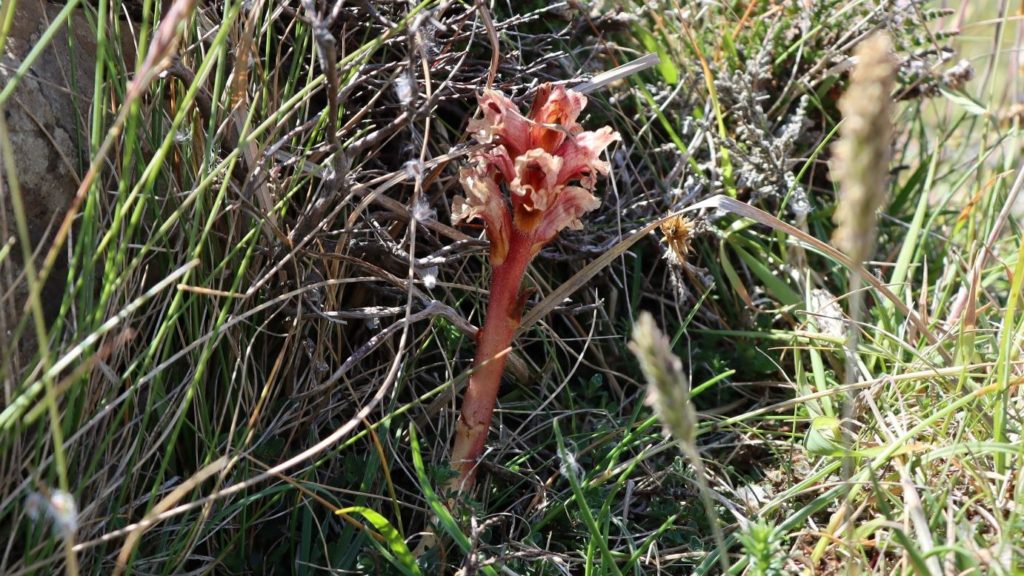 Throughout the day there had been much discussion of Spotted Cat’s-ear (Hypochaeris maculata), identified by the black spots on its leaves. This rare plant is known from only a handful of sites, and the team were very happy to collect a specimen on The Lizard. 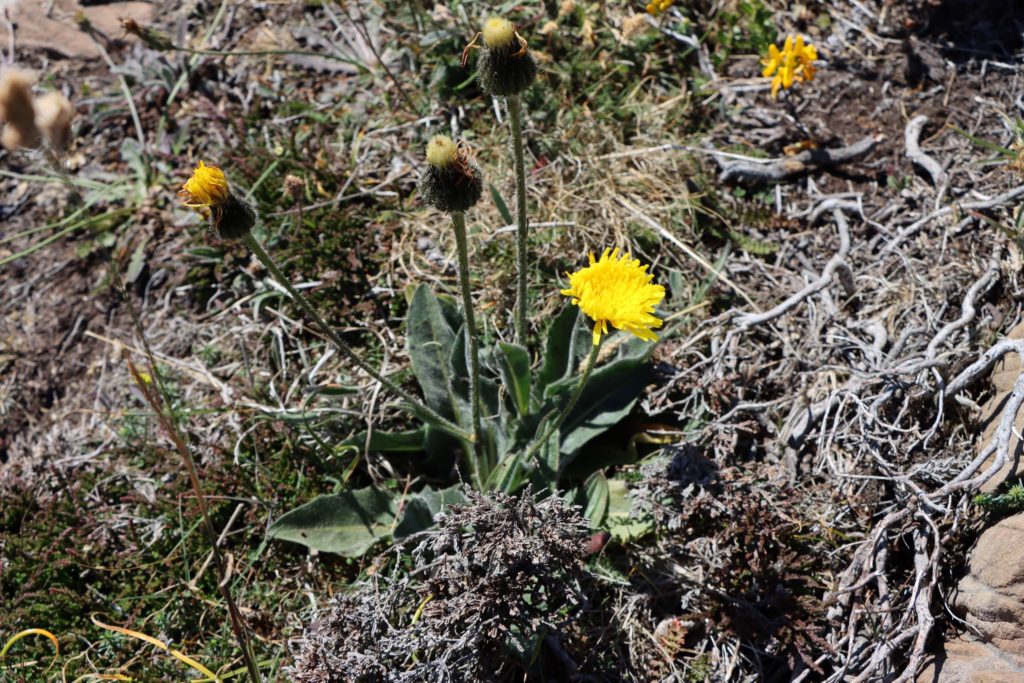 The final plant of the day was an iconic one for the location. The unusual topography of Kynance Cove has left a rocky island in the middle of its yellow sands. It goes by the name Asparagus Island, after the Wild Asparagus (Asparagus prostratus) that grows there.

Fortunately, the Darwin Tree of Life team didn’t have to scale its crags to reach the plant – it also grows on the adjacent clifftops. Also known as Prostrate Asparagus, several plants were found growing horizontally out of the rocks. The stems did indeed look very similar to the asparagus you might get served at a fancy restaurant. 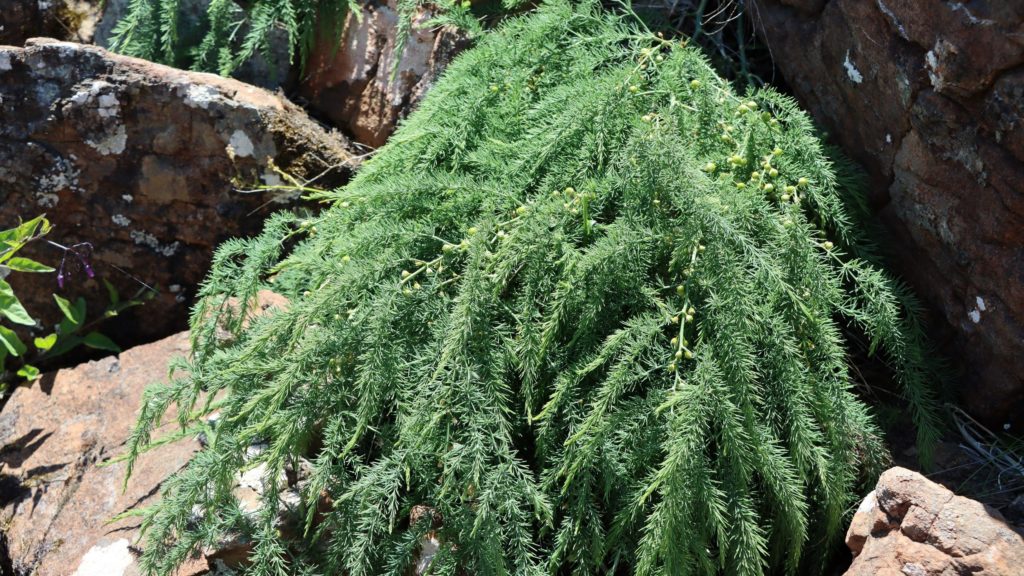 With the collecting at Kynance done, and many of the Botanical Cornwall Group and other participants dispersed, Ian had one more exciting plant to show the group. A half hour’s drive away on the other side of The Lizard, across the fields from Goonhilly Satellite Station, Ian found perhaps one of the rarest plants in Britain and Ireland.

In Britain, the pygmy rush (Juncus pygmaeus) is found only on The Lizard and its numbers vary greatly in size from year to year. It enjoys damp, compacted ground of the type you find beside gates or left by wheels on tracks. The plant is under considerable pressure as these habitats dry out or get vegetated over. 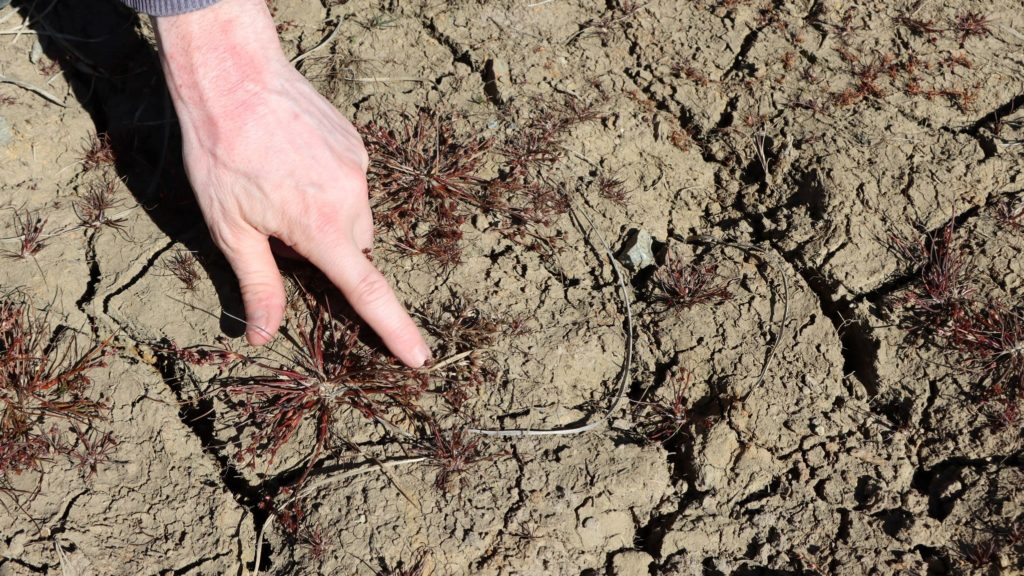 Unfortunately, despite some strong growth a few weeks previously, the warm dry weather had done for the pygmy rush this year. The dried remnants could not be collected and the team would have to return next year if they wanted a sample. Maarten also collected some of the dried seeds to see if they might grow in controlled conditions back at Kew. 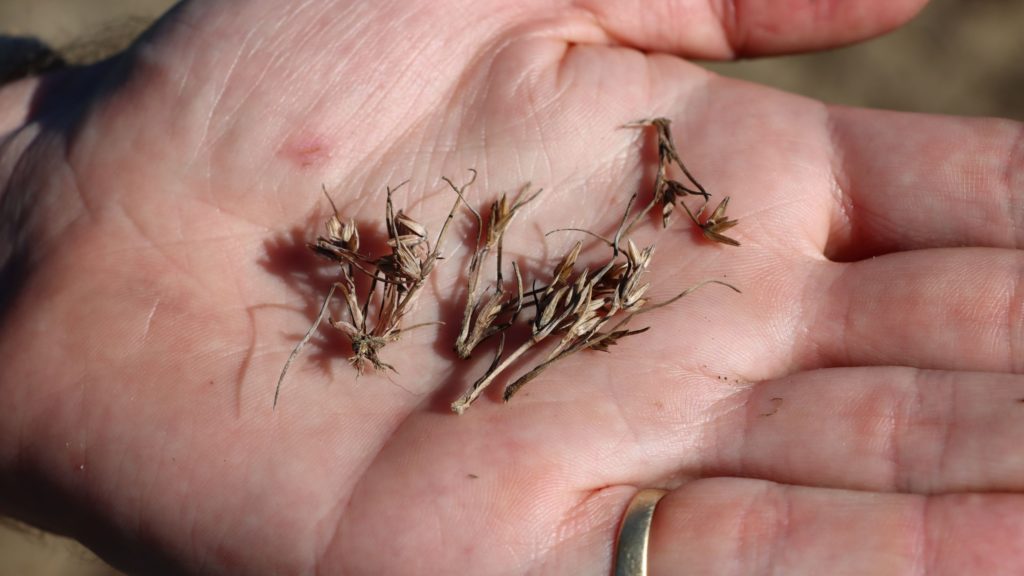 To say the pygmy rush was visually underwhelming would be an understatement – it made the sea-spurrey from the car park that morning seem like a magnificent orchid in comparison.

The true wonder, however, was that Ian and Colin knew exactly where to find it. If Darwin Tree of Life is to ever sequence the genomes of all the named species in Britain and Ireland, our collectors need to know where to look. The years of experience and wisdom accrued by skilled ecologists passionate about their local patches is invaluable.

The next day the Kew team returned to the Lizard with Ian, Colin and a new group of local enthusiasts. Plotting a different route, they managed to collect a whole new list of rare and Cornish-speciality species.