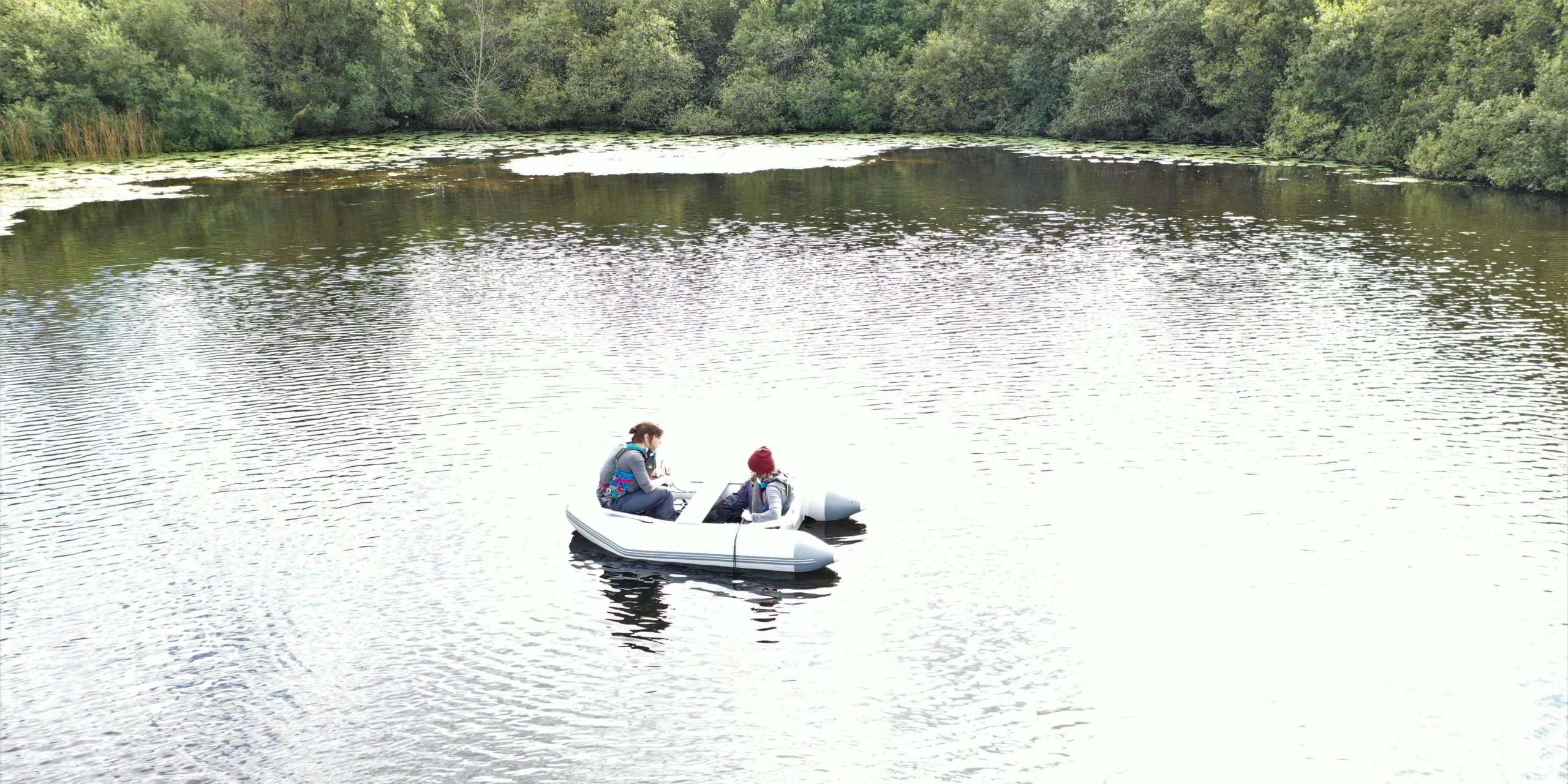 This article is the first in a series exploring how the tiniest organisms Darwin Tree of Life is studying – the single-celled protists – are collected, processed and ultimately have their genomes sequenced. The second article looks at techniques to separate single cells from litres of pondwater  and the final looks at how bioinformatics can crack the complex case of protist biodiversity.

“Sampling protists is never easy, but if you have to go through a swamp then that’s even more challenging.” This was the immediate concern for Estelle Kilias and her team from the University of Oxford when they first laid eyes on Priest Pot in 2020. A fence wrapped in barbed wire plus another 15 metres of thorny undergrowth still lay between them and the small pond. They were already ankle deep in sludgy water.

Priest Pot is a body of freshwater, about one hectare in surface area, near the village of Hawkshead in the Lake District. Aside from its inaccessibility, the site appears fairly unremarkable. However, these waters are teeming with a huge variety of single-celled organisms – known as protists – blooming and feeding in their own complex ecosystem beneath the surface.

For this reason, Priest Pot – which is believed to have been the private fishery for the monks of Hawkshead Hall back in the Middle Ages – is now part of a National Nature Reserve (NNR) alongside the adjacent swampy fen.

Although Priest Pot has been studied for more than 50 years, visits by scientists are infrequent – the last one was in 2007. The site is also on private land and closed to the public. Priest Pot is therefore a largely undisturbed protist paradise. This was one of the reasons the DToL team were so keen to sample its waters and sequence the genomes of some of Priest Pot’s protist population.

But getting permission to do so was more difficult than expected. Estelle found herself asking all around Hawkshead village to get the name and contact details of the landowner, finally striking lucky at one shop owner. When her emails were met with silence, she sent a written letter. The response eventually came back – via email – inviting the Oxford team to sample Priest Pot and providing a phone number to discuss the sampling in more detail.

Phone calls were filled with scientific facts and a lot of laughter, rewarding the persistence of Estelle’s attempts to initiate first contact. Since then the Oxford team have taken the time to explain (with slides) the science that DToL wanted to do, and they continue to send updates on what they have found.

Getting on the water

Having scouted out the site in 2020, the team returned to sample Priest Pot in September 2021. The next logistical challenge was getting their kit onto the water.

It’s important to leave a scientific site as close as possible to the state you found it in, explains Estelle, and that meant suffering a few scratches from the thick undergrowth. The team dealt with the barbs on the fence by throwing an old doormat over it. A once-useful boatshed and jetty at the water’s edge now cracked underfoot, and the landowner’s strenuous recommendations to avoid it went well heeded.

Estelle and her teammate Elisabet Alacid took the small boat onto the pond. They lowered an Aqua TROLL 600 multiparameter probe to test the environmental conditions of the water at different locations and depths, raising and lowering again elsewhere, discussing with their colleagues on the shore which were the most interesting spots to sample.

Hunting for the most promising protists

One of the most fascinating things about Priest Pot is that each layer of the small lake has its own environmental conditions. Because of this, different protist species exist in different quantities at each spot.

There are three basic types of protist:

Phototrophs – protists that make their food from the nutrients around them, using light as an energy source. Each feeds on different nutrients and species can only ever be as abundant as the minimum concentration of their required nutrients. Even if all other nutrient levels are perfect, they won’t grow.

Heterotrophs – feed on other organisms, including phototrophs but also other microbes such as bacteria. They are only as successful as the amount of their preferred prey around them.

Mixotrophs – feed on other organisms like heterotrophs, but when necessary can also make their food using sunlight.

All sorts of environmental factors affect which protists are present, and the Oxford team monitored for oxygen, temperature and chlorophyll levels. Time is also a factor, as phototroph species bloom at different speeds and heterotrophs take time to move to where their favoured prey is located.

Previous surveys of Priest Pot had found an anoxic layer (totally without oxygen), but a recent bloom of oxygen-producing phototrophs and an unusually cool summer meant the conditions for this were disappointingly absent.

‘You feel every bone’

Once the decision has been made about which locations to sample, the team sent down a five-litre Niskin bottle, which allows samples to be taken exclusively from specific layers of water. These are then raised and poured into larger 20-litre carboys.

The carboys were then taken back to shore for the other team members – Thomas Richards and Guy Leonard – to prefilter. This involves passing the sample water through a 70μm mesh to remove larger debris, as well as zooplankton which might eat the protists.

By the end of the field trip, the DToL team had taken 100 litres of water from Priest Pot, from different spots ranging from the surface to near the bottom, 3 metres 30 cm down.

As well as the Niskin bottle collection, the team also brought a plankton net made from cloth which picks up anything larger than 5μm when dragged through the water. On shore was a small microscope for observations in the field, with a larger microscope set up back at the team’s B&B.

“You feel every bone, and you feel muscles you didn’t know you had,” Estelle says. “The sun was also shining, which on one hand was good, but on the other you’re in the middle of a pond with no cover. I definitely needed a hat – and a paracetamol at the end of the day.”

However, this is only the beginning of sequencing the genomes of Priest Pot’s protists. Back at their lab in Oxford, the DToL team have to use a huge array of techniques and tricks to coax out the rare, previously unsampled protists from 100 litres of living pond water. That’s all before the protists are sent to the Earlham Institute for full-genome sequencing. Samples will also be sent up to CCAP in Oban, who maintain protist cultures accessible to the wider scientific community – read more about CCAP’s fascinating work here.

This article is the first in a series of articles tracking the Priest Pot protists through the Darwin Tree of Life genome-sequencing pipeline. Further articles on laboratory techniques and extracting the DNA will appear on the DToL website in the near future.